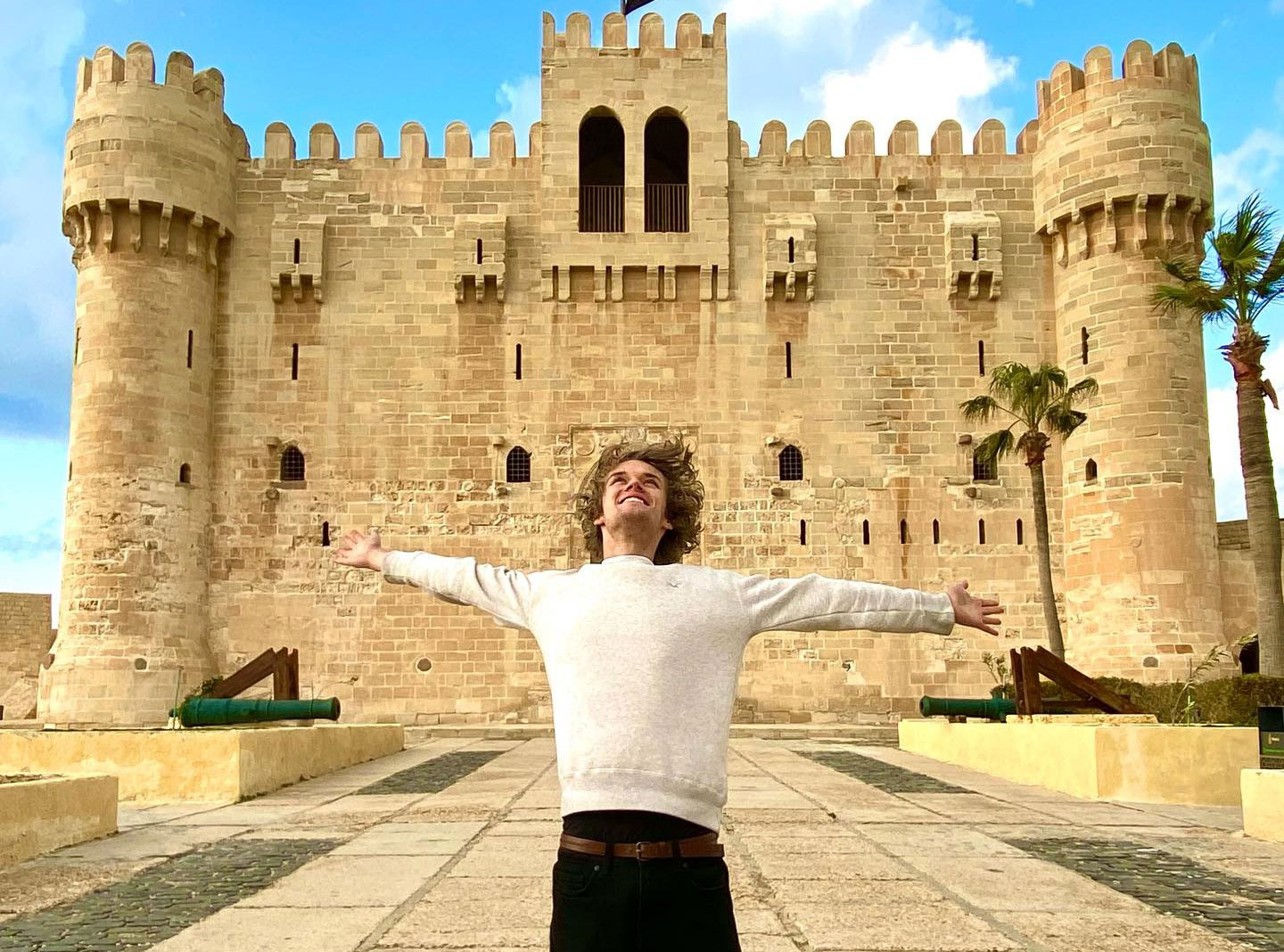 A 2 days trip to Cairo and Alexandria from Hurghada will take off your blindfold and guarantee you a chance to see the Ancient History of Egypt from another perspective. You’ll roam the various Cairo monuments such as the Giza Pyramids, the Great Sphinx, the Egyptian Museum, and others. Furthermore, you’ll have a taste of Egypt’s great wide history, followed by your visit to Alexandria’s milestones. A bunch of Alexandria’s milestones is the Catacombs, Pompey’s Pillar, and the Citadel of Qaitbey altogether. Also, the trip will be combined with the sublime services our company owns such as a gifted private Egyptologist, a 5* fancy accommodation, as well as transferring you with the most modern vehicles, so book with us now!

Day One: Fly to Cairo-Visit Giza Pyramids & the Museum 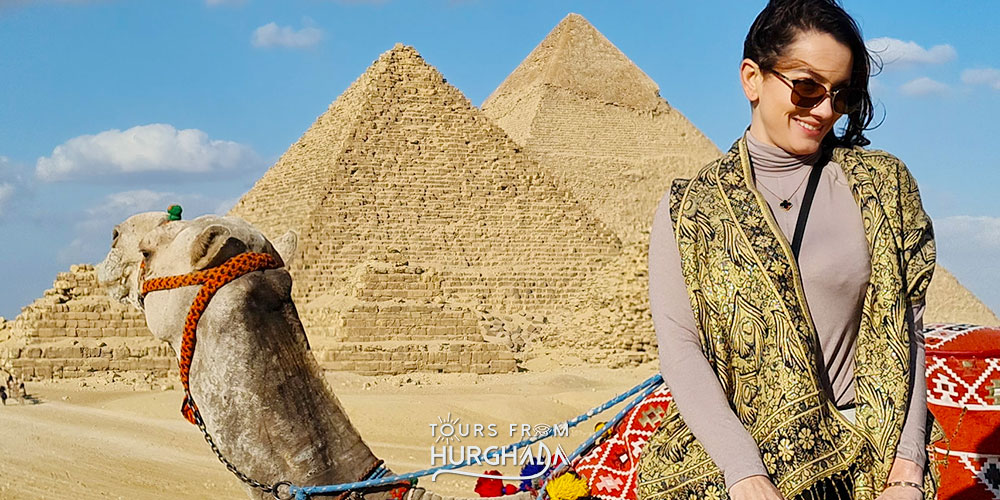 A 2 days Cairo & Alexandria tour from Hurghada will have your time flying in a blink of an eye due to how much fun you will be witnessing through your trip. Your first day will start off with picking you up from your hotel in Hurghada by an A/C car, followed by transferring you to Cairo by plane, to officially start your first-day trip through the famous marvelous landmarks scattered all over the Giza complex, which include:

The Giza Pyramids Complex was diligently put into construction to present the eternity of ancient history. The structure of the capacious complex supports historical relics that are tombs belonging to Old Egypt and established around 4,500 years ago. The complex includes the following monumental constructions along with other associated ones:

Being the final wonder that the ancient world owns is just fine to be a historically unreplaceable monument. The Great Pyramid was consecrated to the dignified King Khufu. It’s worth acknowledging that the milestone took two decades to come to the final construction.

The peculiar feature that marks the Sphinx is owning a discriminative structure that melds two distinctive entities of lion and man together. The structure first existed during the epoch of the honorable king Khafre between 2558-2532 BCE.

The Valley temple was mentioned, on a regular basis, as the esteemed royals’ burial headquarters of mummification. The eminent temple was utterly built during the twenty-sixth century BC. Included within it, are rich granite stories, as well as traffic pristine alabaster slabs coating the floor.

Seeking a rest to ease your tiredness that accumulated at this limit of your tied-up day, it’s time to offer you your lunch meal for the day, then we’ll head to our next site.

The vast architecture was found in 1902 to embody the Neoclassical style vividly. The Egyptian Museum is the first museum to be built in North Africa, as well as the Middle East including artifacts and antiques that link the traveler to the Ancient Great History of Egypt.

After being exposed to a limited number of the aesthetic and historical sides on the first day of your 2 days trip to Cairo and Alexandria from Hurghada, it’s time for our tour to have an official limit, as a result, we’ll deliver you to your chosen hotel in Cairo for the tour to stay the night. 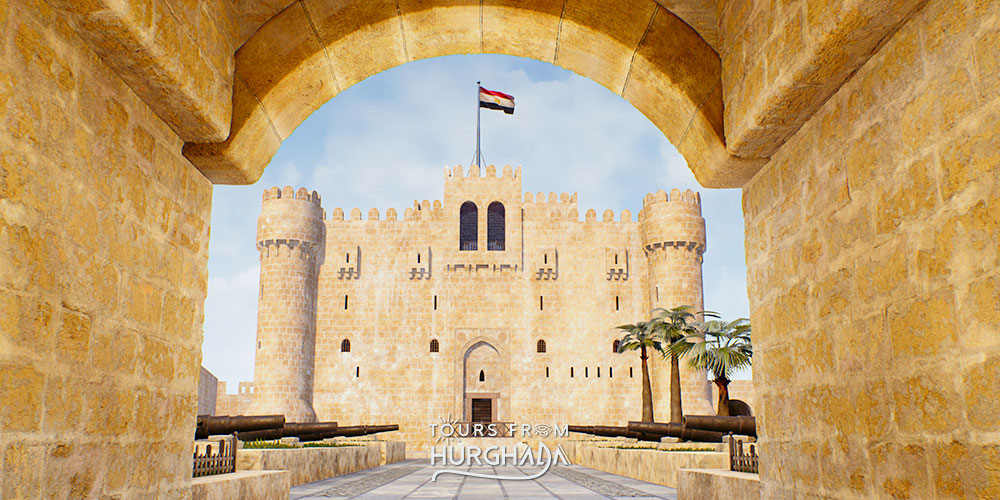 The sequent day of the 2-day trip to Cairo and Alexandria from Hurghada will be starting by setting you a sumptuous breakfast at your hotel in Cairo, next, we’ll have your company during your transition to Alexandria by the equipped air-conditioned vehicle, to meet your tour guide and visit the following:

The catacombs of Kom El Shoqafa serve as a wonder included among the other Middle Ages’ Seven Wonders. The distinctive necropolis hosts a severe number of statues, and tombs, in addition to a bunch of archaeological items which belong to the Hellenistic & Pharaonic periods.

Pompey's Pillar was found as a privilege to Diocletian, the honorable Roman emperor, between 298-302 AD. The massive Corinthian column was built to prop a gigantic porphyry sculpture of the armed emperor. You can find the pillar in eastern Alexandria’s Serapeum’s temenos.

Enjoy a magical lunch at a sea-view restaurant in Alexandria, then continue your trip by visiting:

The Qaitbay Citadel is known to be another bewitching wonder that belongs to the ancient world’s seven enchanting wonders. We need to admit that the great construction of the citadel serves as the Mediterranean Sea’s as well as Egypt’s defensive barrier, being built in the fifteenth century BC. It had the exact same previously-identified location as the lighthouse of Alexandria.

The Great Library of Alexandria saves its place in history as being one of the most prominent and massive libraries worldwide. The library was completely architected between 285–246 BC. You can dive into its epic number of between 200,000 and 700,000 different books in all subjects.

Ultimately, your 2-day trip to Cairo and Alexandria from Hurghada finishes here, so you’ll be safely delivered back to Cairo airport to fly to Hurghada and then delivered to your aforementioned hotel in the coast-historical city of Hurghada by A/c vehicle. 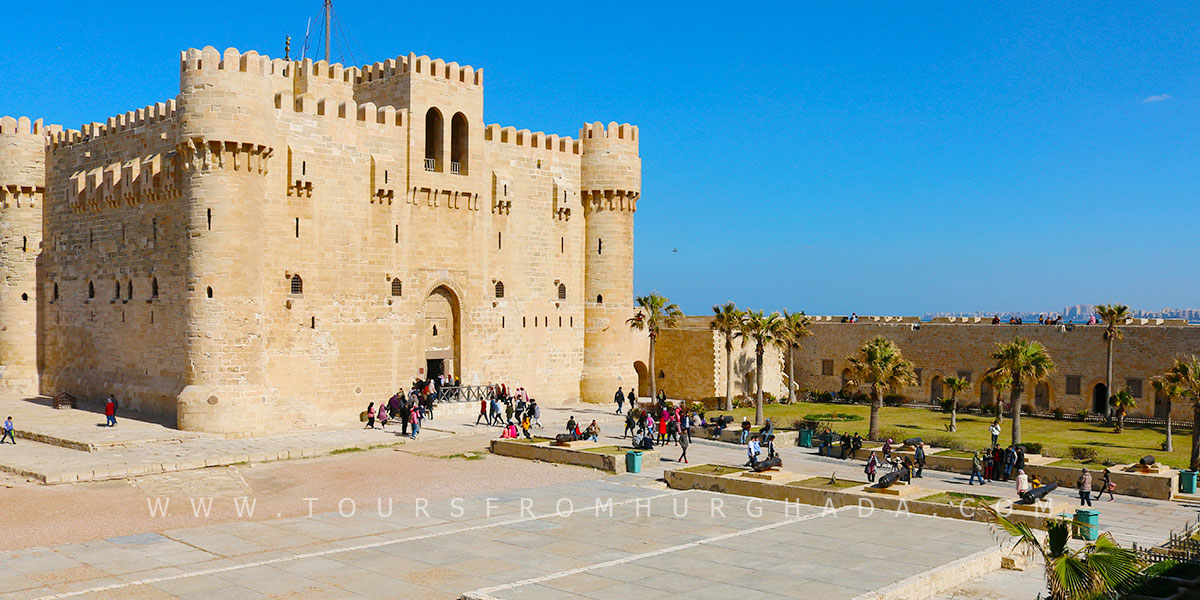 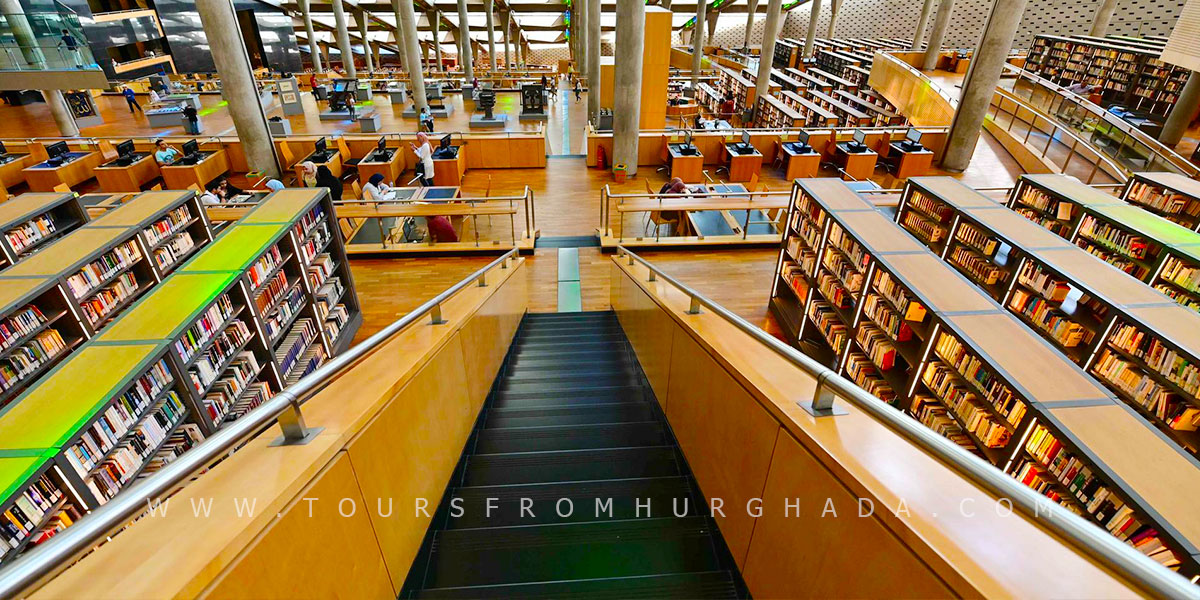 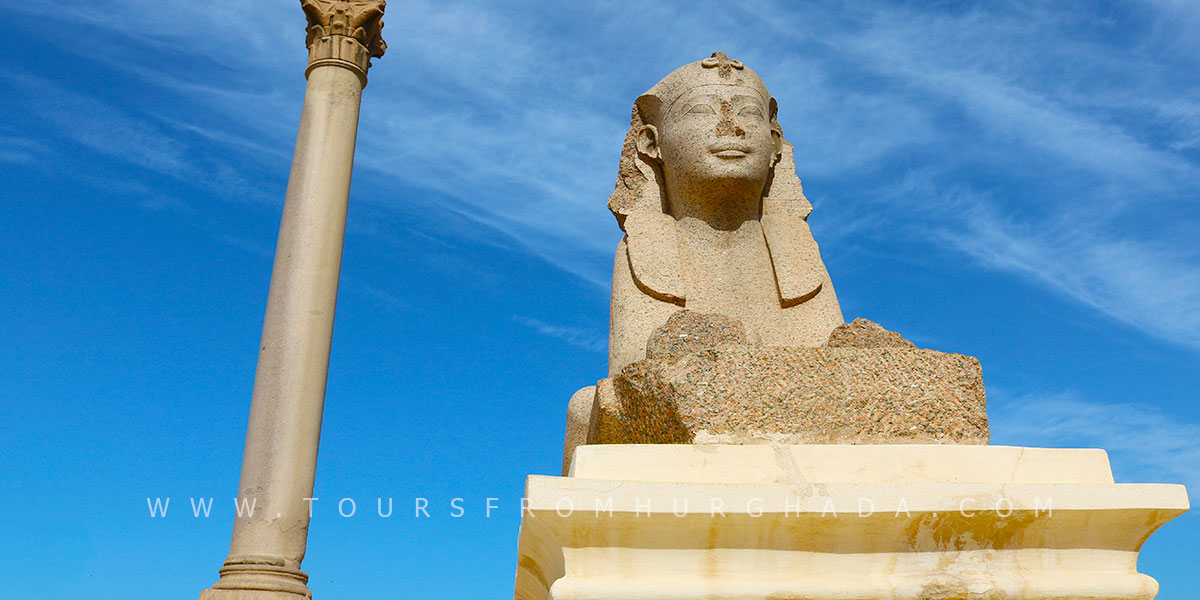 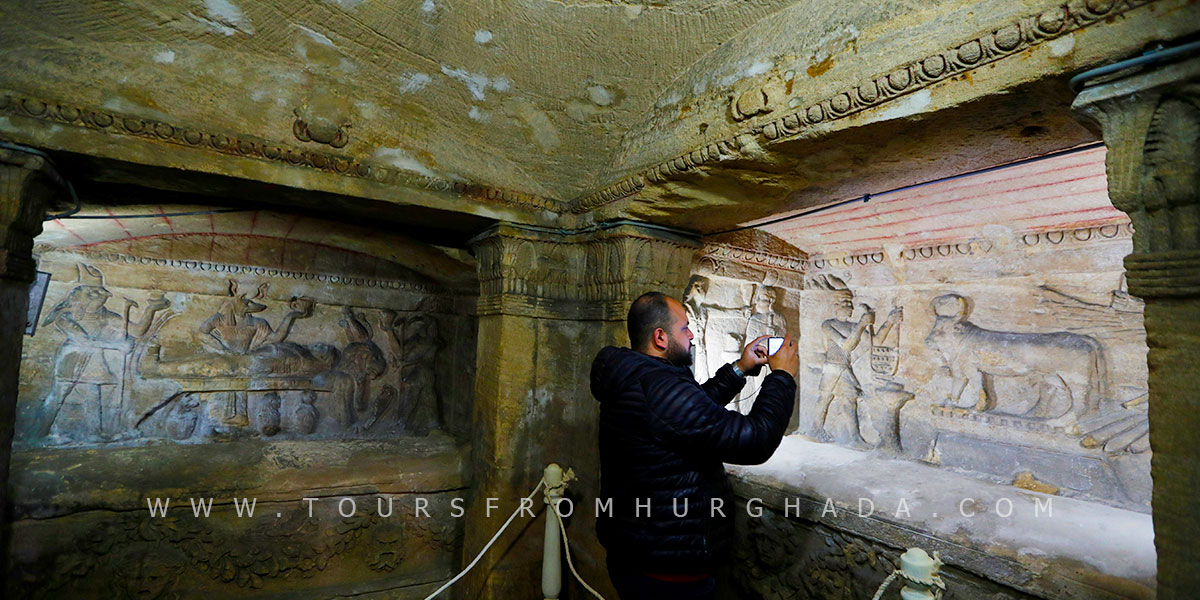